The Importance of Diversity in Clinical Trials 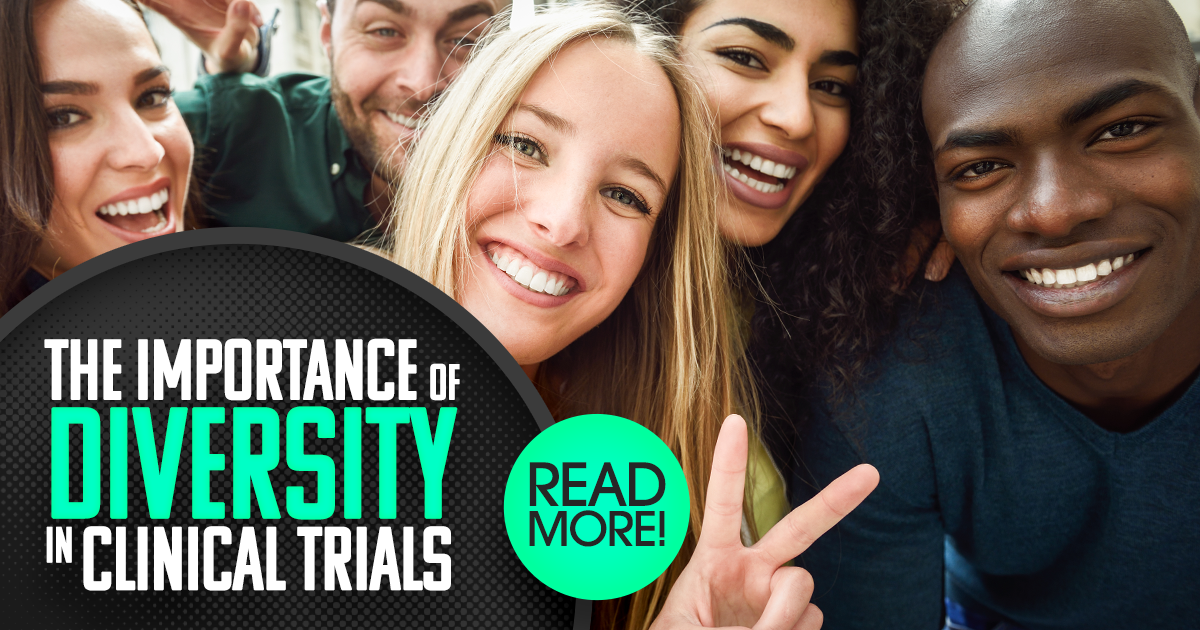 Although most events and celebrations are cancelled due to COVID-19, April is still National Minority Health Month. According to the NIH, “National Minority Health Month is an effort to raise awareness about health disparities that continue to affect racial and ethnic minority populations.”[1] In honor of this awareness month, we will be discussing the importance of diversity in clinical trials, especially for minority groups.

Accurate Representation of the Population

Clinical trials are the only way to safely and effectively bring new drugs to market and once a drug is approved, it will be prescribed to people of different ages, genders, races, and ethnicities. This means that it is essential for all groups to be accurately represented to have the best data possible. However, research has shown this to not be the case.

The FDA has reported that groups such as Blacks, Latinos, and Asians are grossly underrepresented in clinical research. For example, according to the US census, black or African Americans represent about 13% of the population, but only make up about 5% of clinical trial volunteers. Similarly, Latinos make up about 18% of the population, but account for only 1% of clinical trial volunteers.[2]

Understanding the Lack of Representation

Historically, minorities have not participated in research due to factors such as lack of transportation, lack of financial support and inability to take off of work, and lack of trust due to past victimization.

Clinical trials require extensive oversight to monitor a patient’s safety and the drug’s effectiveness. This means there could be multiple doctor visits required every month. Many minorities lack transportation to get themselves to appointments that often. That also means taking off of work to attend visits.

While biopharma companies do pay patients for their time when participating, it is not a lot in order to avoid coercing volunteers. Recent research has shown that patients in households bringing in less than $50,000 per year were 27% less likely to participate in clinical trials.[3]

There are always risks when participating in a clinical trial, but it is up to the individual to determine whether the benefits outweigh the risks. The benefits for minority participation are even greater.

First, communities that typically do not receive the best healthcare could have improved access to new therapies. Second, the US population would be better represented which means the condition being studied will be better understood and the effectiveness of the drug would be proven across all populations.

Play Your Part, Get Involved Today!

Medical advancements would not be possible without volunteers! Now that you know more about the importance of diversity in clinical trials, it’s time to get out there and represent!

Centex Studies has clinical trials enrolling now in South Houston, North Houston, Lake Charles, and McAllen. Browse online or give us a call at 281-918-0048 to learn more!